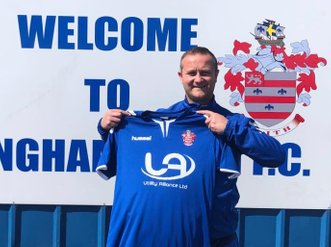 Following on from the news that Carl Morris has joined the backroom staff, we can also announce that Craig Haley will also be joining us as First Team Coach.

Supporters may be familiar with Craig as he was at Billingham Synthonia during our two derby fixtures in December. Craig also spent the end of last season at Guisborough Town.

His playing days included a spell at Bolton Wanderers at youth level and he finished his career playing for several clubs within the Northern League.

Craig had this to say this morning, "After talking with Barry, Eddie and Paul about Billingham Town and what the future holds both on and off the field for the club, it was an easy choice to come here and far too good an opportunity to turn down.

"I would like to thank everybody for this fantastic opportunity and hope to help continue with the success of the football club going forward.

We wish both Carl and Craig all the best in their respective roles.